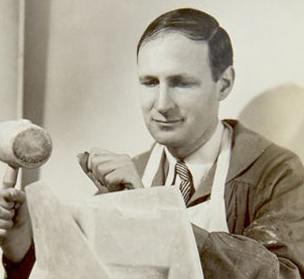 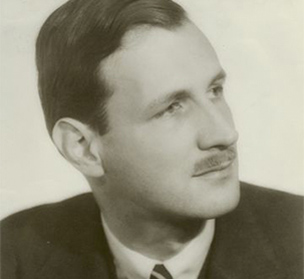 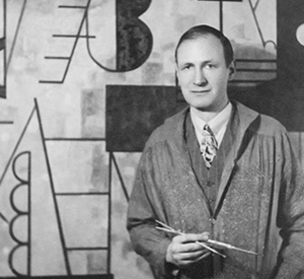 George L.K. Morris was born in 1905 to a wealthy and prominent American family which included a signer of the Declaration of Independence and signer of the Constitution, diplomats and statesmen. After his education at Groton and Yale, Morris traveled to Paris in 1929 with artist and collector A.E. Gallatin, a cousin, where he met Picasso, Braque and Brancusi. He then took Leger's and Ozenfant's classes at their Academie Moderne in 1929 and 1930.  In 1931 he built his studio on the grounds of his parents' country estate in the Berkshires and based its design on that of Ozenfants' private home and studio in Paris which was designed by Le Corbusier. Morris made more trips to Europe in the 30's, collecting European abstract art, often from artists he knew. In 1935 he married Suzy Frelinghuysen and in 1936 became one of the founding members of the American Abstract Artists. Morris admired the geometric order of Cubism and was insistent that art should be made for its own sake and not to reflect social causes like the popular Social Realism of the 1930's. His role as an editor and art critic of the Partisan Review furthered his influence as abstract art advocate. Many decades ago he wrote in the Partisan Review, 'the hour is overdue for a refinement of sensibility in our vulgar modern world: perhaps, against the pressures of contemporary life, the artist can again concentrate on the creation of the beautiful object.' In 1941 Frelinghuysen and Morris built their Bauhaus inspired house onto the studio and incorporated frescoes into the walls. In the 50's Morris' paintings of receding checkerboard patterns anticipated Op Art and in the 60's he enjoyed his greatest success in the art world. Morris was fatally injured in an automobile accident in Stockbridge, Massachusetts in 1975. His work is in the collections of the Metropolitan Museum of Art, The Whitney Museum, The Brooklyn Museum, The Philadelphia Museum of Art and the Carnegie Art Institute.

George L.K. Morris selected work for his own collection while traveling in Europe with A.E. Gallatin and acting as curator for Gallatin's Museum of Living Art.He also collected while purchasing art for the fledgling Museum of Modern Art in his role on the Advisory Committee. He collected American art from fellow American Abstract Artists, the group which Morris helped found in 1936 when abstract art had few supporters and the art press had developed a  hostile response to it.

Please view the Gallery pages to see a sampling of Morris' and Frelinghuysen's artwork as well as their collection.